Hello friends! It took me quite a while in composing this blog post. Blame it to my lazybones the past few days. haha. Honestly, I couldn't start the post because I can't think of a good title. Yeah. I can't write a post unless I already have a title to match it with. hahaha. I was on my way home today (or tonight?) when an idea suddenly popped in my mind. Seven Little Secrets. Sounds intriguing.

Few days ago, Ventocosseus gave me an award! It's called "Versatile Blogger Award." Last December 2011, I also received the same award from a fellow blogger. Though I don't see myself as 'versatile' per se, it still feels good that people recognize this blog and it encourages me to continue doing what I have already started. 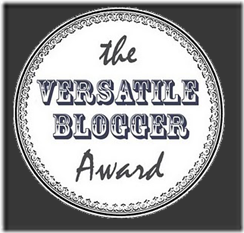 Like any other awards, this one comes with rules. Here they are:

Mr. Ventocosseus of The Toilet Thoughts, thank you from the bottom of my liver! hehe :) To my readers, why don't you hover your cursor over here and visit his blog? I'm telling you, you won't regret spending some time in his blog!

To comply with rule #2, I have come up with these seven little secrets [which are already known by few people, so technically, they're not secrets at all. hahaha] I won't list down the same things I've already shared here before.

The seven things above came in randomly. haha. So, that's all I could share for this post. You'll learn more about me by simply hanging around this site. hahaha.
Now, I'm passing this award to these people: