Home » Did You Know? » THE SHRINKING OF ARAL SEA

THE SHRINKING OF ARAL SEA

I was watching the news earlier today when I accidentally changed the TV channel. I don't know the title of the program but it featured a sea---a dying sea, located between Uzbekistan and Kazakhstan. It caught my attention so I watched the program and ended up researching more (and blogging) about its history  . So here it goes...
*** 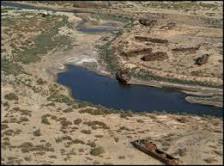 The Aral Sea (Kazakh: Арал Теңізі Aral Teñizi; Uzbek: Orol Dengizi; Russian: Аральскοе МοреAral'skoye More; Tajik: Баҳри Арал Bahri Aral; Persian: دریاچه خوارزم Daryocha-i Khorazm) is a salineendorheic basin in Central Asia; it lies between Kazakhstan (Aktobe and Kyzylorda provinces) in the north and Karakalpakstan, an autonomous region of Uzbekistan, in the south. The name roughly translates as "Sea of Islands", referring to more than 1,500 islands that once dotted its waters.
***
Millions of years ago, the northwestern part of Uzbekistan and southern Kazakhstan were covered by a massive inland sea. When the waters receded, they left a broad plain of highly saline soil. One of the remnants of the ancient sea was the Aral Sea, the fourth largest inland body of water in the world, with an area of 68,000 square kilometres (26,300 sq mi). It is an inland salt-water sea with no outlet. It is fed by two rivers, the Amu Darya and Syr Darya. The fresh water from these two rivers held the Aral's water and salt levels in perfect balance.
However, the Aral Sea has been steadily shrinking since the 1960s when the Soviet central government decided to make the Soviet Union self-sufficient in cotton and increase rice production. Government officials ordered the additional amount of needed water to be taken from the two rivers that feed the Aral Sea.
The Soviet scheme was based on the construction of a series of dams on the two rivers to create reservoirs from which 40.000 km of canals would eventually be dug to divert water to the fields. The fields flourished but with such vast areas of monoculture, farmers had to use massive amounts of chemical pesticides. And with irrigation, salt was drawn to the surface of the soil and accumulated. When the Tahaitash Dam was built on the Amu Darya near the city of Nukus, there was no water left in the riverbed to flow to the Aral Sea, hundreds of kilometers away. To the surprise of the inhabitants of Muynak, the Aral Sea began to shrink.
At first, they assumed it was a temporary condition and dredged a canal to the receding shore so boats could continue to ply the sea and still dock at the wharves. But the effluents that did reach the sea were laced with a deadly mix of salt and pesticides from the cotton fields. Fish populations plummeted and eventually, when the canal was 30 km long and the sea continued to move away, the boats were abandoned to lie like great leviathans on sands that were once sea bottom. By 2007, Aral sea's area had declined to 10% of its original size, splitting into four lakes – the North Aral Sea and the eastern and western basins of the once far larger South Aral Sea and one smaller lake between North and South Aral Sea. By 2009, the south-eastern lake had disappeared and the south-western lake retreated to a thin strip at the extreme west of the former southern sea.The maximum depth of the North Aral Sea is 42 m (138 ft) (as of 2008).

Over the next 30 years, the Aral Sea experienced a severe drop in water level, its shoreline receded, and its salt content increased.
The marine environment became hostile to the sea life in it, killing the plants and animals. As the marine life died, the fishing industry suffered.
The region's once prosperous fishing industry has been virtually destroyed, bringing unemployment and economic hardship. The Aral Sea region is also heavily polluted, with consequent serious public health problems. The retreat of the sea has reportedly also caused local climate change, with summers becoming hotter and drier, and winters colder and longer.
***
There is now an ongoing effort in Kazakhstan to save and replenish the North Aral Sea. As part of this effort, a dam project was completed in 2005; in 2008, the water level in this lake had risen by 24 m (79 ft) from its lowest level in 2007. Salinity has dropped, and fish are again found in sufficient numbers for some fishing to be viable. However, the outlook for the remnants of the South Aral Sea remains bleak. The shrinking of the Aral Sea has been called "one of the planet's worst environmental disasters".
SOURCES:
http://en.wikipedia.org/wiki/Aral_Sea
www.orexca.com/aral_sea.shtml
***
"people never really care enough many times until it is very late..."
Related Topics:
Labels: Did You Know?
Share:
Newer Post Older Post
Loading...