We have a pet turtle named Pong. (or pong-pong as my aunt calls him) He's been here for 6months or so... I don't know what kind of turtle he is, so just take a look.

Pong was a shy-type at first; he wouldn't even get his head out of his shell. But after some time, he became comfortable with people around and started to play with us. PLAY means he follows you when you walk, or when you point your finger at him, he'll open his mouth. (talented. haha...)

I read that turtles need to eat at least 3 healthy foods a day. But Pong is so picky! He eats bananas before. Then, time came that he doesn't want it anymore. We tried feeding him leafy vegetables, to no avail. What he eats now is Gardenia's White Bread! SERIOUSLY. 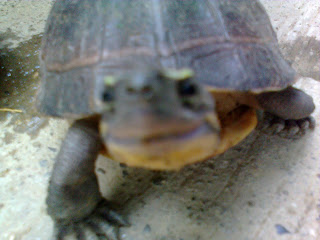 My mom advised us to just put him in the wild. But we're afraid that he'll just be caught by other people and kill him... That'd be sad...

I hope Pong would live long... Anyway, if you're wondering where we keep him, well, he has a tub in front of our yard. But he doesn't stay inside it for long... He escapes then walks around the garden. We usually see him covered in mud! hehe... :)