The issue about Senator Sotto plagiarizing a US blogger’s post [and other articles found online] is still not settled up until now. I have created this post a day after the issue went viral but decided not to publish it. It's because I thought the issue would just fade away and Tito Sen would be man enough to accept his fault and give his apology. I hit it wrong. Just today, I've read an article which cited the Senator's latest speech about the issue of plagiarism. He's firm on his words that he didn't violate any law. Question is, do we really need a law to  be able to establish what is morally acceptable to the society and what is not? Do we have to violate an existing law for us to be "obliged" to apologize? Is it all about the laws created by people? How about God's laws?

A lot of blogger were deeply insulted by the Senator’s remark which goes like this, “Bakit ko iko-quote yun e blogger lang yun?” BLOGGER LANG YUN. The phrase is so insensitive. Yes, she is just a blogger. But she sure did put a lot of effort in making her article. She used HER OWN words and cited her sources. Then one day, the Senator’s staff stumbled on her blog and just copied her hardwork WORD for WORD?! Seriously! They could have atleast revised the sentences!
Although they are saying that they just used the same source, why on earth that even the [wrong] punctuations are exactly alike?! It is true that it’s hard to reword medical terminologies but COPYING other person’s work is so unacceptable!


“…I put her (the source) work in my own words and you copied my words.” ~Sarah Pope 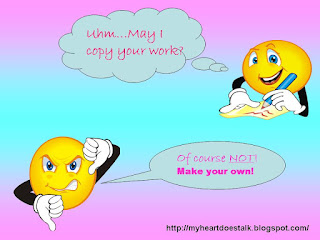 Even the supposed “feel-good-apology” from the Senator’s Attorney didn’t sound so apologetic at all. How hard is it for them to accept that they were wrong and just apologize? Yes, he is indeed right that blogs are meant to be shared. SHARED! NOT COPIED!!! >:/ Proper credits should be given to whom they are due. It is a form of giving appreciation to other's work which helped you in making your own. Is it really that hard? Or they really meant to share the information as if it was their own?!


This issue is not about RH Bill. It is not about diverting people’s attention from the RH issue to plagiarism. What the bloggers community and concerned people’s point is, COPYING someone else’s work is still stealing! Even a kid at a nursery school knows that. Right? Even when we made our baby thesis when we're in highschool, we were instructed to cite our sources. If plagiarizing is not a crime (since there is no law about it) and nobody could be sued for copying, what is the very purpose of citing our sources?
On the other side, I feel sorry for all the hurtful words that people say against the Senator. I still respect him as a person. But, though he was not really the one who did the act of copying, he is still responsible for the action of his staff. Respondeat Superior. Or in English word, the phrase means, "Let the master answer."
Even if his intention is to protect life, he should’ve cited his own opinion and not merely relied on copy-pasted articles found online. As the cliché goes, “The end does not justify the means.”

Based on the article published by Rappler, the Senate President suggested that they should make a law that would include the rights of those with blogs to make it clear. For a more detailed information about this, visit Rappler's Site. But, how serious were they about this? Are they going to manipulate the law for it to go into their favor? Who knows?
To my fellow Filipino people, while we have the right to use our God-given capacity to feel angry, also keep in mind that it doesn’t give us the right to bash other people. Our anger could only do further damage. We may comment. We may express our opinion. We may say anything we want as long as it doesn’t go below the belt. We’re still Filipinos after all. Let’s keep our cool regarding this hot issue. 
Related Topics:
Labels: Bill for Bloggers, Plagiarism
Share:
Newer Post Older Post
Loading...