It was November 12, 2011 when I found myself lying like a vegetable (okay, not really) on a hospital bed. Intravenous fluids, medications, laboratory exams, oxygen tank and other hospital supplies---things that were just part of my usual environment during my duties as a nurse. But, seeing those things and thinking that they were within my sight for my own use make me want to throw up. It’s hard to be a patient. Really. *insert paranoid face here*

I’m not going to tell you what happened to me last year all over again. If you want to know, just read this blogpost I created after I was discharged from the hospital. It has a sequel, I tell you, and it’s here.

I can’t help but measure the progress I made in connection to my health status since the day I got sick up to this moment when a year has already passed. In terms of “if I’m okay”, I’d say I’m fine. Obviously, I am no longer sick and the aftershock (I’m talking about complications) that popped out like popcorns (lol) are gone. No more labored breathing, palpitations (though I experience minor issues with my heart sometimes, like it just suddenly migrated near my ears. I hear my heartbeat, yeah. Lab dub. Lab dub.), tremors, etc. In short, I am healthy! Or that’s what I want to be.

In terms of weight, oh well, I dropped my weight from 42kg to 38kg when I got sick. It all happened in a matter of four days! Four-r-r-r days! Can you believe that? I can. Lols. I find it funny how I lost 4kg in a snap of a finger then, after a year, I was only able to gain back half of it. Or almost half of it I should say.

Of course, I didn’t write this post just to bore you with my “oh-I’m-still-alive-after-a-year!” tantrums. Let’s move on, shall we? (Why did the words “move on” sound bitter-ish to me? Bwahaha)

The other day, my family and I were talking about visiting a relative who had undergone an operation. My mom said that if we cannot give anything to help them with their burden, financial I mean, it’s better that we do not go. She’s a very practical woman I tell you. But, in as much as I wanted to say she’s wrong, I chose to just stay silent. My father, on the other hand, said that the presence of visitors is quite enough for the sick person to feel a little okay. I agree with him.

When I was in the hospital, I only got a few visitors---mostly my aunties. I felt really sad that none of my friends visited me in the hospital. I wasn’t surprised though. Because, I didn’t tell them I was there. Hmm. Hehe. But they found out later, and planned to visit me just when I was about to get discharged. They paid me a visit when I was home already.

Okayyy. Enough of it.

So, I was too excited to post something today that I hurried to get home. Unfortunately, the jeepney I chose to ride took so many stop overrrrs. If you know what I mean. Hay. When I was about a kilometer away from where I would get off, I felt a little anxious. Or scared, maybe? Why? I was the only one left in that d*mn car! (I don't really curse. Promise. hehe)

I suddenly remembered those scenes from movies where the main character gets kidnapped by a group of people, or worse, killed. In movies, the main character would either fight for her life or a prince charming would suddenly pop out of nowhere to save her. It could be a little melodramatic if it happens, except, (a) I am not a princess that really needs to be saved and (b) I wasn’t in a movie. And did I tell you I have always hated those scenes? LOL.

Anyway, since I am already here typing, it means I got home safe. Yey!

I received a love letter from Mr. Google today. Did anyone else receive one? I don't think I could use it though. :) 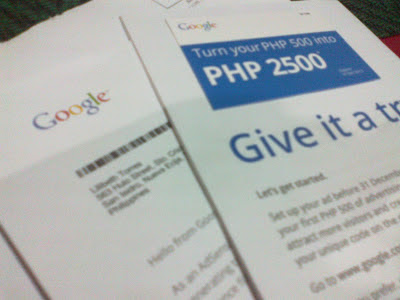