Time---this is one of the most basic things I should be giving this little space in the blogosphere. But, unfortunately, I can’t. The things I wanted to share with you, my dear readers, already piled up sky-high and it makes me feel sad that I do not have the luxury to write anything; not even during the idle moments on my work because I.Do.Not.Have.A.Computer! Bringing my own laptop is not much a choice because it’s too heavy for my little sexy body and it seriously exhausts me whenever I do. lol. :p

So. Lilyverse? What is that, you ask? Well, it’s an alter space here on earth where only I, myself and me exists. It’s a pseudo-personal planet that can only be accessed through my brain. In other words, what’s new in MY life?

Few weeks ago, while having my usual bath, I palpated my neck. I have always thought that I could detect goiter by doing that. Silly me. :p I fear that I have that disease because of the occasional palpitations, fatigue and weight loss I experience. To make the long story short, instead of goiter,  I noticed a slightly smaller-than-grape, movable, gel-like lump on the middle third of my right neck. I knew it was just a swollen lymph node, which normally occurs if you have some kind of infection in the body like cough or colds. The bad news is, I don’t have an infection that I am aware of.

After another week, I felt another swollen lymph node just above my left clavicle. It was just a mongo-size one but slightly painful. I kinda got worried about it so during one of my duties, I asked a doctor (surgeon) to palpate my neck and he confirmed that those were just swollen lymph nodes. He asked whether I had any infection and I said No. He then advised me to have a chest x-ray and to consult a pulmonologist.

Honestly, I know that he’s implying that there is a possibility that I have…weak lungs. Also, I have a niece who had a primary infection (Tuberculosis in Children). So, being sOoOoo health-conscious as I am, I promised to have an x-ray as soon as I can.

Symptoms of Tuberculosis (and whether I experience it or not):

People in the hospital always joke that I probably have that disease because I am so sexy thin, but I just shrug it off.

Unfortunately, just last week, I noticed another swollen lymph node at the base of my left neck. I was like, “O my G, what is wrong with me?!” That’s why last Tuesday, I finally had a chest x-ray. 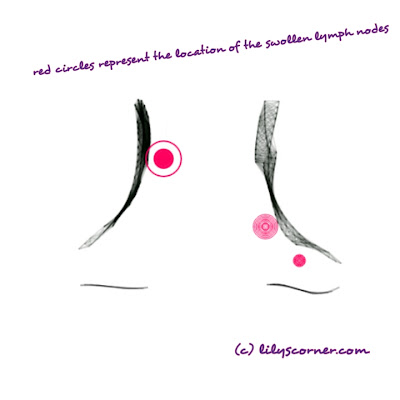 I felt nervous while waiting for the result. The radtech assistant scared me to death when she asked whether I had an x-ray before and what the result was, etc. I worried that something bad was seen in my x-ray; hence, the questioning. My hands were trembling microscopically while she handed me the result that reads like this: 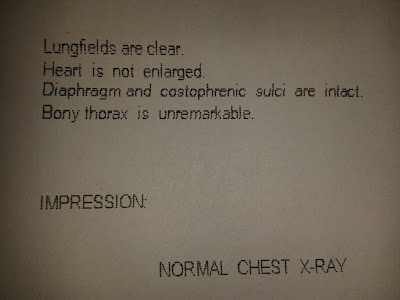 Normal! I was totally relieved, of course. But then again, I still worry because I do not know why my lymph nodes are swollen. Also, I feel so tired even after a nap or a good night sleep. I am not gaining weight, either. Hmm. I think I do need another trip to the doctor, don’t I? x_X